Protecting the Protector – The Role of Moussa Sissoko

Ask anyone who supports the one, true North London outfit, and they’ll tell you that Pierre-Emile Hojbjerg has been the signing of the season.  They may even say that this applies to not only Spurs and the English Premier League, but Europe and the world in general.  The Danish midfielder has been superb in the Premier League, averaging 7.1 ball-recoveries and 90 touches per match, showing his importance to both the defense and build-up associated with manager Jose Mourinho’s approach.

In comparison to two of the more prominent midfielders in the game, N’golo Kante and Casemiro, Hojbjerg stacks up nicely.  This season, while Kante has attempted 77 duels, and Casemiro 91, Hojbjerg has recorded 107.  And in looking at ball recoveries, Hojbjerg is on pace with Kante at 64, the latter of whom is highly regarded as best-in-class in the category.  Casemiro, having played two less matches, sits at 41 recoveries (Squawka).  In short, Hojbjerg is incredibly talented and this season has shown himself to be one of the best in the world at his position.

However, no matter how talented the individual, it does take a cohesive unit around them to play at the pinnacle of their ability, and this certainly rings true with Hojbjerg.  As good as the entirety of Tottenham have been, one person worth focusing on when discussing the displays of Hojbjerg, is Moussa Sissoko.  The French International has found himself quite comfortable alongside the Dane, and the two seem to be forming quite the partnership, both on an off the pitch.

Sissoko’s stats also hold tough against Kante and Casemiro, with a passing accuracy of 89.05% and a take-on success rate of 100%, up against 88.52% and 63.64% (Kante) and 83.54% and 50% (Casemiro) (Squawka).  Having come into his own as a midfielder under former boss Mauricio Pochettino, Sissoko has become much more disciplined under the management of Mourinho, which is much less a reflection on the Argentine, and more so a result of natural progression and growth over time.  However, one would be remised to feel as if Jose Mourinho does not deserve significant credit here, as he is well known to be best-in-class when it comes to developing defensive efforts.

But, I’d like to remove the stats here, and simply talk about what Sissoko does towards the whole.  In football, some players may have more of a direct impact on the score-line of a match, but it is extremely difficult to determine who might hold more importance in the overall approach.  All eleven players must do exactly what is required of them, and with Sissoko, I argue that his most important job is to cover ground, allowing Hojbjerg to protect the defense and in general, maintain control of the midfield. You’ll notice that when the two are deployed together, Hojbjerg looks to remain central, but is also focused on covering the back line off to the left as left-backs Sergio Reguilon and Ben Davies join the attack.  Hojbjerg really covers one-whole half of the pitch, from that center line to the left touchline.  Sissoko on the other hand, will be tasked with not only covering an area of the field horizontally (as Hojbjerg often is), but also vertically, as he will cover for the RB, for the RW, and most importantly, for Hojbjerg as he looks to play a little bit higher than Sissoko.  The Frenchman will cover from the left of the center line, all the way to the right touchline, and roughly 10 yards in either direction from front to back.  What this does, is allow Hojbjerg to ensure that he puts himself in positions to recover the ball in the midfield and reset possession, something that comes even more effectively as Hojbjerg sees the percentage of his completed passes hover in the 90th percentile each week.

So, while Hojbjerg is really tasked with protecting the back line and protecting control of the match, Sissoko seems to be tasked with protecting Hojbjerg, allowing him to impose himself in the middle of the park and in turn, on the match.  This requires pace, stamina and a tough mental approach, all of which Sissoko, who had to fight for his opportunities at Tottenham, has an abundance of.  The two really seem to have formed a formidable partnership, and when Spurs go the distance this year, they will have had been a huge part of it. 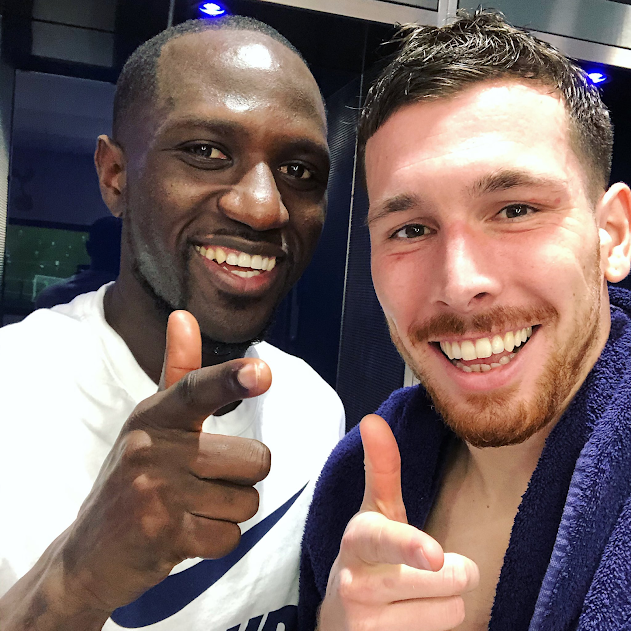